“We Travelled To The Other Side Of The World To Make Our Dreams Come True!” – Case study Aeternal Requiem

How far are you willing to travel to make the album of your dreams? Why do bands fly up to thousands of kilometres to Astia-studio to record their music on magnetic tape? “We travelled to the other side of the world to make our dreams come true!” – Case study Aeternal Requiem.

By reading this post you’ll get to join for an album session with a band from America at Astia-studio. I warmly recommend watching the 81-minute session documentary along with the 24-minute drummer’s my day video. Links to the videos are embedded in this blog post. You’ll gain knowledge on how huge a difference the facility, producer and the equipment makes. There’s lots of interesting details for musicians and sound engineers.

“We travelled to the other side of the world to make our dreams come true!”
– Case study Aeternal Requiem

Five years prior to the session I received a message from Texas, USA. Aeternal Requiem‘s guitar playing vocalist Austin Zettner congratulated for a cool Ensiferum album and requested the possibility to arrive at Astia-studio to record his music.

A few years went by and I had made the transition to tape recording only. In short it means recording and mixing to a magnetic tape without the A/D and D/A conversion. After numerous sound comparisons I noticed that the longer you keep the signal chain analogue, the more the small nuances are present in the final product. This is the reason why I use analogue equipment through-out the process and convert the music from analog to digital only after mixing.

The band expressed their interest in the method that strongly deviates from the mainstream. Yet, the lack of editing and vocal tuning was something to worry about, boldly they wanted to have the full analog experience.

They made the reservation a year prior to the session. And what could be a better date for the metalheads from the hot Texas climate than the cold January of 2019. Snow was something we’d have no shortage of. Yet, there was one obstacle we had to solve: where to find the drummer for the session?

I recommended Mr Toni Paananen, Astia-studios most used session drummer for the job. The band was immediately sold after watching his YouTube channel drum videos. Now the USA-Finland international team was up.

Read more about the differences between analog and digital formats: 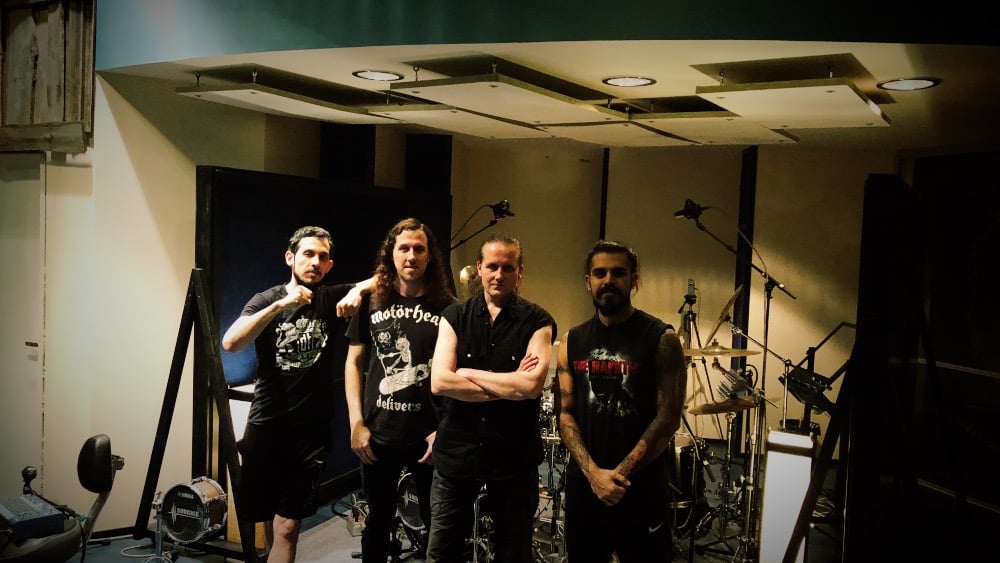 When a band is willing to travel to the other side of the world, some 9.000 kilometres one way, you understand that there is a strong dedication involved. On the journey along with Austin was the guitarist John A. Catts and bass player Semir Özerkan who is originally from Turkey. So our cool team was even more international.

Once they tackled the jetlag we set up the gear. I miked the instruments and tweaked the sound for the recording which usually is 95 % final. After adjusting the headphone monitoring we still weren’t ready for to start tracking. When the members involved haven’t met before the recording, it’s best to rehearse for a few days first.

This time too it turned out as a great idea. Not only did it improve the arrangement and playing solid together, but we could also make a more thorough pre-production. This helped to get the best possible result for the album.

Toni had an idea about sharing the session experience in social media, but on which platform and how? That’s where the idea started and so he came up with the successful Drummer’s MY DAY -vlog series.

Not to replicate my previous posts, this time you won’t be reading about the recording techniques or any detailed descriptions. I’ll only mention that we recorded drums on tape in two days and didn’t use any drum samples or editing in any form. Toni played each song on one solid take from beginning to end.

But then again, if you are hungry for more details about the drum tracking, you should watch the Drummer’s MY DAY 1: Aeternal Requiem @ Astia-studio -video below to join the session from the drummer’s POW. Even though it’s mainly for the drummers, every musician will find it both highly informative and entertaining.

Do you know the feeling where you completed the drum recording and then starts the days or even months of editing, replacing the real hits with samples and the cleaning of the tom tracks? That’s what I did too for over 15 years. But is it necessary or even needed to do so?

We gave birth to Aeternal Requiem‘s 42-minute album that has eight songs. I recorded and mixed it on magnetic tape without editing, vocal tuning and replacing real drum hits with artificial ones. We used a metronome only to get the starting tempo right and when the drums started to play the beat, we turned the “rhythm advocate” off.

The album making took 12 studio days and there was no need for any extra days. We did the recording in 9,5 days, mixing in 2 days and the mastering took half a day. Mastering included separate versions for CD and streaming services along with a full analog signal path vinyl masters which I cut using a razor blade. How’s that for old-school?

Yet, what does it mean to use a razor blade during mastering? Watch this video where I prepare Ensiferum’s album Two Paths vinyl master by cutting the tape with a razor by clicking here.

Have you seen the Finnish Heavy Metal Fans Aeternal Requiem interview video? Click here to learn how the band felt right after the session on January 27th 2019.

Why do musicians call sessions at Astia-studio as Anssi’s school of music? How to survive the first shock after you realise how accurate you really need to play? And then again, how the dream eventually turned into reality?

But enough talk. Let’s get started with the music documentary of the day. You are welcome to follow the making of Aeternal Requiem‘s album Rise in detail. The role of the producer is present throughout the session with important tips and lessons, on which I recommend you to focus on. While enjoying the ride I hope the video will inspire and give food for thought.

Watch the documentary below or by clicking this link.

Thank you very much for joining the band from the United States for the ride that made them travel over 18.000 km towards their dreams. The members say that the trip taught them many important lessons. I’m grateful not only to share the studio experience with them but especially to help to make their dreams come true.

Click here to order Aeternal Requiem’s album Rise. There’s no catch or costs when you click the link as well as no income for me. You can safely visit the site. My goal is to help you find their music and to support them.

If this post and the documentary inspired you, please share it on social media. This way you will help your friends to enjoy the information shared here.

To experience as awesome session as Aeternal Requiem, click here and let’s continue the discussion. Thank you very much and all the very best!

Astia-studio is a full analog recording studio located in eastern Finland with over 25 years of experience. Bands and artists from all over the world including USA and the furthest corner of Russia, Vladivostok have arrived to us for tape recording sessions.

216 shares
Manage Cookie Consent
We use cookies to give you the best experience; to provide functionality for the website, and for statistical and marketing purposes. You as a person won't be identified.
Manage options Manage services Manage vendors Read more about these purposes
Settings
{title} {title} {title}