How Ensiferum ended up recording Two Paths on tape pt.2

On the previous part you learned how during demo session Ensiferum members were blown away by the huge difference between tape and computer recording. We went thru the recording process for drums and bass along with rhythm guitar including the recording setup used on the album. Now let’s continue with vocals, accordion and mixing as I talk you thru how Ensiferum ended up recording Two Paths on tape part 2. 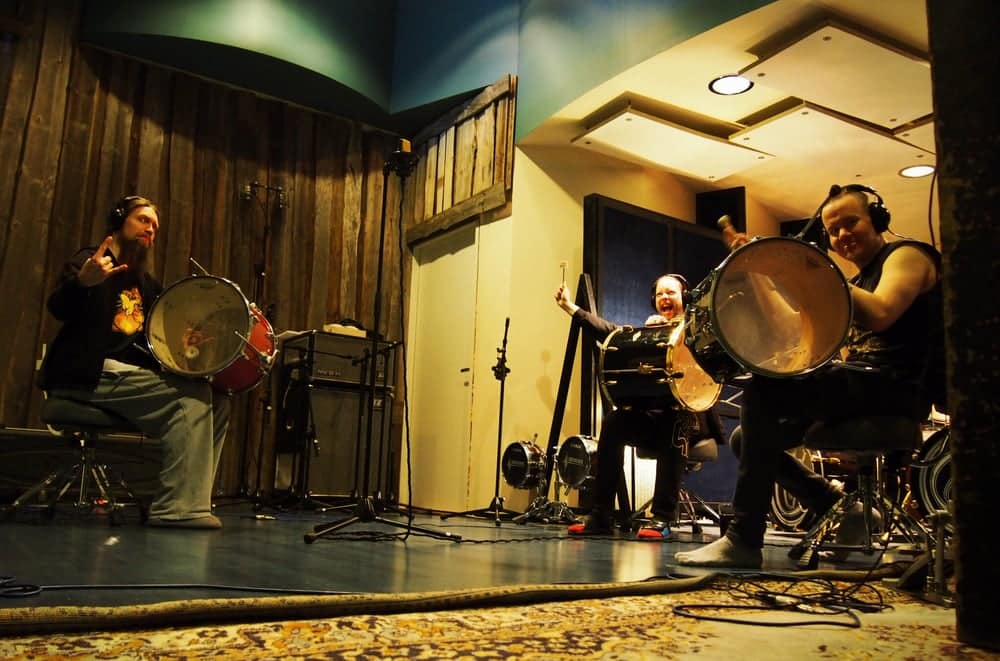 It was awesome to see how Petri Lindroos reacted when for the first time he heard his voice from tape. He had gotten used to hearing his vocals recorded on computer and was amazed by how much more tape captures.

I used Neumann U67 tube microphone from 60’s to Trident Vector 432 mic preamp with a little eq to cut mud. On insert I had two channels of hardware 1176 on the way in for compression. I always record as final sound as possible and this is something that every band I work with loves. We are thru-out the session listening sound and mix that is 95% final.

Anssi has a really great recording method, in that he wants to find the best possible sound and tone for drums, bass, guitars, vocals etcetera at the start, so that as you finish the individual tracks it’s close to what you want the final sound of the album to be. That way, you don’t have to ponder over what you can do in the mixing.
–Sami Hinkka, bass

During the years that I’ve had the pleasure of having fun with Petri we have developed a cool way of recording together. I know what he is capable of and he knows I accept nothing but the best so he always delivers killer vocals on 1 – 3 takes. Usually on the first take.

I firmly believe that when every member including myself always does their best, the final result could not be any better. If it could, then we would not have done our best. This is something I encourage everyone to do in all areas of life. Why would you want to do something half-assed? We make albums that will live on long after we’ve gone from here to eternity, so why not leave a legacy of something mega cool instead of mediocre.

Working with tape has its challenges as you cannot just record something and then later on choose which takes to use. Every time you press record, the previous take on that track from the point on is deleted. My school for this way of working was when I recorded the first two Children Of Bodom albums on tape. We fixed stuff like: “those two notes from the solo, here”, so there was no room for error and I became pretty good at overdubbing on tape machine. Recording vocals with Petri was a breeze and I don’t think we’ve ever had such an easy-going vocal session with such an emotional result.

…recording on tape wasn’t as difficult as I had feared.
–Petri Lindroos, vocals / guitar

Read more: 5 Things You Didn’t Know About Children Of Bodom’s Something Wild Album 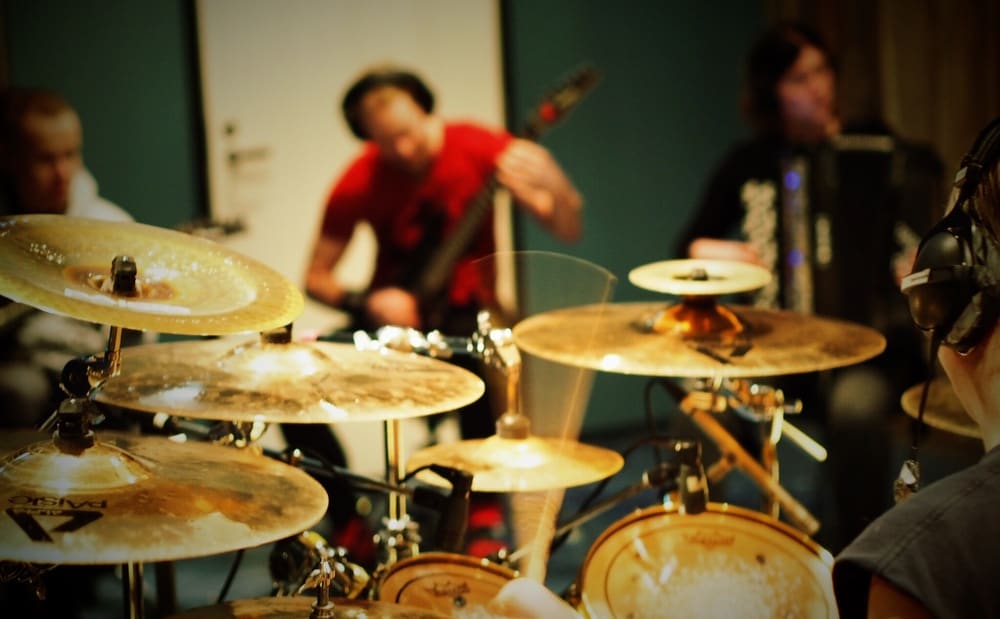 Once we completed all tape recording I synced tape to DAW and transferred all drums, bass, rhythm guitars and Petri’s lead vocals on computer. We would record the remaining tracks on computer without the tape machine running all the time, not to wear the tape out.

Because of tape wear the world almost lost Queen‘s awesome Bohemian Rhapsody song. There’s an interesting story on Joe.co.uk interview here how during recording the guitar player Mr Brian May noticed he could see through the tape due tape wear! Then again, sometimes old tape can suffer from the sticky tape syndrome. I shed both light and tape on a funeral doom metal band Skepticism‘s legendary Stormcrowfleet debut album blog post called Remix Tape Session here.

After completing all other instruments, I deleted the transferred files and again synchronised tape to DAW. We kept all drums, bass, rhythm guitars and Petri’s lead vocals analogue all the way to deliver as much to the listener as possible.

Especially when enjoying the album from vinyl record, you can hear a lot more detailed things compared to other formats. What I mean is about sound and performance. Sure you can hear traces of it when listening the album on digital platforms too. Yet, if you want to hear the music like we heard it in the studio, please enjoy it from the vinyl. Read more about the huge difference between analog and digital platform on my Vinyl Records And How To Improve Enjoying Music post here.

I recorded accordion along with acoustic guitar, nyckelharpa and few other instruments using two microphones instead of the usual one mic. The inspiration came from the legendary Mr Bruce Swedien who recorded and mixed Michael Jackson among many other cool world-class artists. After a brief A/B comparison we always ended up have a stereo pair to capture more depth on these instruments. We also did a cool comparison with accordion.

The amazing Netta Skog is the digital accordion world champion so naturally she uses a digital instrument. After an A/B comparison between analogue and digital accordion we unanimously chose the analogue version to be on the album. You can literally hear her cool touch and see her smile when you listen the accordion parts. We used digital accordion for pads, strings and other synthetic keyboard parts.

The idea for outro came during the last days of recording. Once the arrangement was complete I had the band play together all at once and recorded that on tape. It is the 2nd take that’s on the album. Outro is the only song where Netta’s vocals were recorded on tape. The first vocal take was a keeper and during recording there was a tear in my eye due to the huge emotion of her vocal performance. 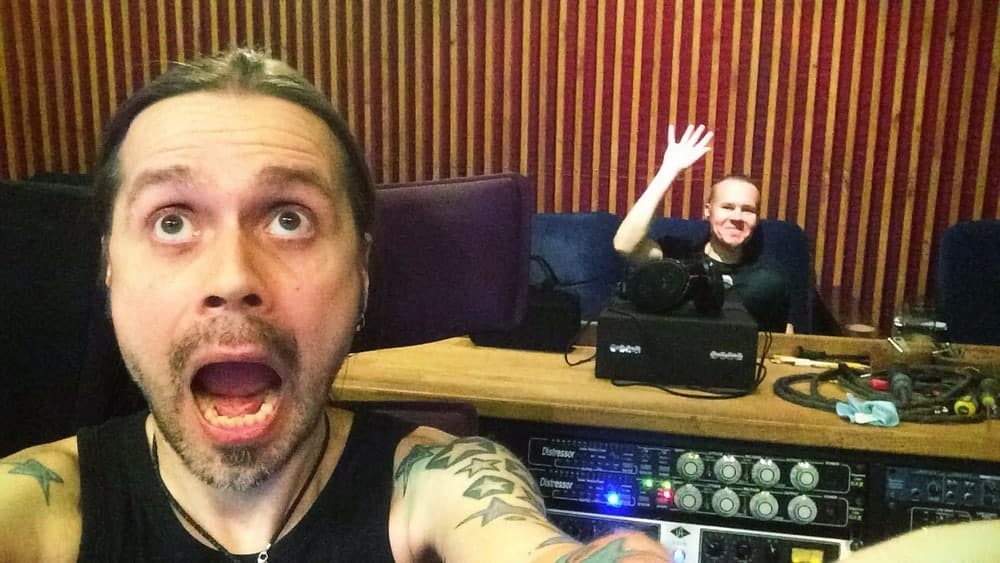 Mixing the album in few days

Mixing Two Paths was a lot of fun. In two days I completed four songs and sent a digital copy to Ensiferum members. Markus Toivonen was the only one staying with me thru-out the mixing. The band replied that all sounds awesome and for the first time they did not want to have any changes. They all loved the result except Petri.

Petri messaged me saying the sound is awful and he is not happy. Vocals were too loud and the rhythm guitars too muddy and quiet in the background. For a moment I had no idea what he was talking about as to me the description didn’t sound like the mix I had done. Before making new version I asked Petri what equipment he’d used for listening. He replied it was his Samsung phone via Bluetooth to a stereo system. I recommended checking the mixes using a laptop and a cable.

After 20 minutes Petri messaged back saying: “No changes!”. Once again I was blown away by how much a mobile phone and Bluetooth can change the sound. And so version 1 for each of those songs ended up on the album!

You can easily do the A/B comparison yourself. Just use analogue source and you’ll be amazed by how much information is lost when audio is converted from analog to digital by switching between Bluetooth and cable headphones. Try using full analog signal path cassette and vinyl for the comparison. New digitally recorded / mixed releases have already lost most of that information.

After completing the album I sent the download link to the manager of Ensiferum and recommended not using a Samsung phone via Bluetooth while listening. He said it can’t be like that and the mixes must work with such system too. I asked how many weeks of studio time could we have to make separate mixes for iPhone, Samsung, Nokia and to each brand on the market. He understood the situation and agreed that one mix for the album was enough. Then again this problem applies equally to all music and not only Two Paths album.

Clicks and pops and more to read

Why the digital version of the album on both CD and streaming service has some clicks and pops is still a mystery. On the files I have such things do not exist. I tried to find the culprit by contacting the label, but that did not lead anywhere.

I would put my money on a corrupt DDP file that is used for digital releases. Yet, even the DDP file at my end is 100% free of click and pops. One thing I’m absolutely sure of; the problem is in digital domain only. In analog audio no such problem could ever occur. It’s very unfortunate to have clicks and pops on the digital version of the album especially as the band and I cannot help it.

I highly recommend listening Two Paths from the vinyl record. It is made not from files but from tape and the signal path is kept full analog delivering much more to the listener. The vinyl version is the closest to how we heard the album when we were creating it here at Astia-studio. I hope you’ll enjoy listening the vinyl as much as we did when recording, mixing and mastering this awesome album. Have you seen how the vinyl master for Two Paths was made from tape using a razor? Check the actual cutting process video here.

I recommend tape recording to everyone regardless of the music style.
–Petri Lindroos, vocals / guitar

Read our other posts with comments from Ensiferum members: 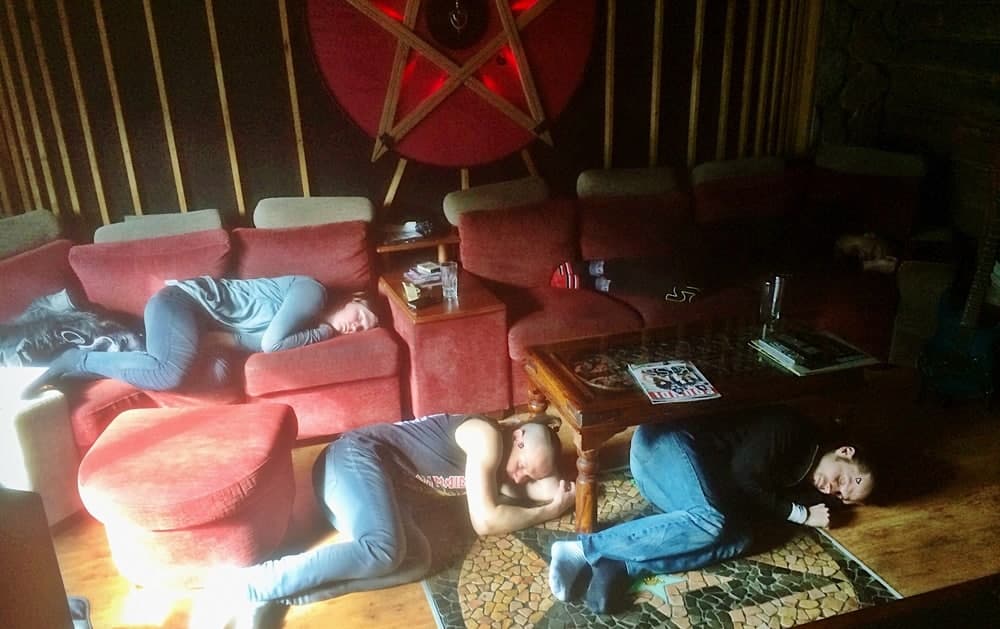 The result is the best sounding album from us, so what else can I say?
–Sami Hinkka, bass

Thank you very much for reading how Ensiferum ended up recording Two Paths on tape. It was a very cool session and an amazing opportunity to show these professional folk metal superstars the unbelievably huge difference between analogue and digital recording.

I would love to hear your thoughts, comments and questions about the topic so please write them below. To experience as awesome session as Ensiferum click here and let’s continue the discussion. Thank you very much and all the very best!

963 shares
Manage Cookie Consent
We use cookies to give you the best experience; to provide functionality for the website, and for statistical and marketing purposes. You as a person won't be identified.
Manage options Manage services Manage vendors Read more about these purposes
Settings
{title} {title} {title}