Have you ever been in a situation where all of a sudden guitar refuses to get in tune? No matter what you do, chords still sound badly detuned. Even though the tuner shows green light, ear says the tuning just isn’t right. I want to share the coolest tuning tip ever with you. It is guaranteed not only to help you with tuning but also to save money on strings.

We were introduced to this on the Two Paths album session and it was surprising how efficient it is.
–Petri Lindroos / Ensiferum

Half a studio day tuning

Numerous times we have bumped into the problem of tuning. Guitar tuning to be exact or actually the opposite; impossible to tune the guitar. We recall few sessions where we literally spent half a studio day just tuning the guitar. Now that must be one of the worst ways to spend expensive studio time, but what can you do if the guitar refuses to get in tune.

Once during a Norther album recording at Astia-studio we had huge guitar tuning problems. No matter what, we couldn’t make the guitars to get in tune. We even suspected the upcoming thunderstorm to be the cause. It was truly frustrating!
–Kristian Ranta / Norther

Yes, we’ve blamed the weather and someone once mentioned something about being cursed. Yet, this time we’ll concentrate on solving the situation without any spiritual clensing.

The coolest tuning tip ever

During Ensiferum Two Paths album session, for reasons unknown to me, I felt I had to clean the guitar and bass strings using isopropyl alcohol. The same substance I use daily to clean the tape machine heads. I poured the liquid on a cloth, placed the cloth under a string, twisted the cloth tight around it and started pulling back and forth one string at time. Every string left a black stripe on the cloth. 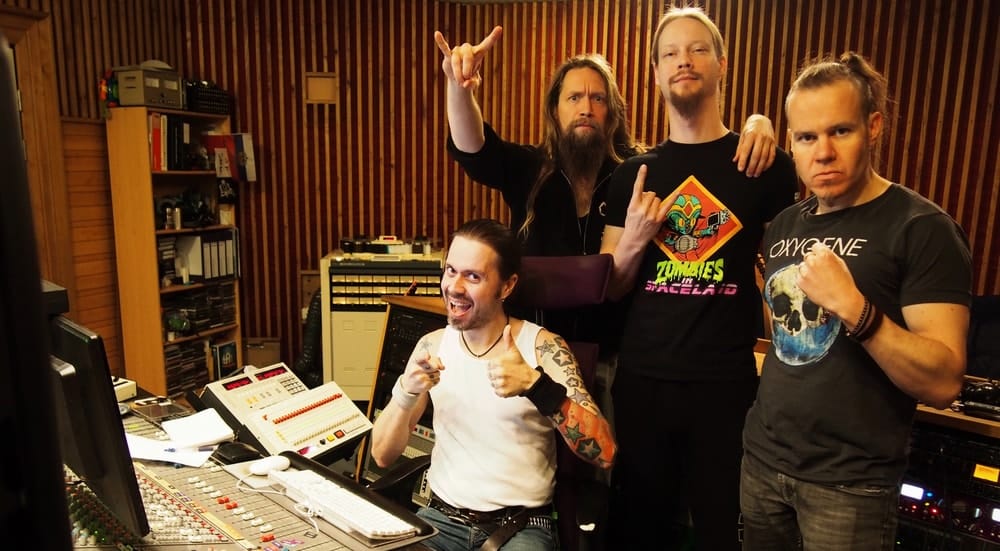 …we bumped into a very common problem; getting guitars in tune wasn’t happening, until Anssi brought a bottle of isopropyl alcohol and used it to thoroughly clean the strings.
–Markus Toivonen / Ensiferum

The Two Paths album session was by far the easiest session ever when it comes to getting guitars in tune. Most of their axes have a locking-nut system to sustain the tuning. When in the morning we went to studio, warmed the string, cleaned them with isopropyl alcohol and checked the tuning, we didn’t have to touch the tuning knobs at all!  Their guitars were all the time in perfect tuning and we didn’t encounter any tuning-related problems during the session.

On Two Paths we recorded all guitar parts of both Petri Lindroos and Markus Toivonen using just one set of strings. Petri said his strings were several months old and Markus changed his on the first day of the session. Thru-out the album recording strings sounded bright unlike on previous sessions where after few songs they seemed to become very dark and needed changing. 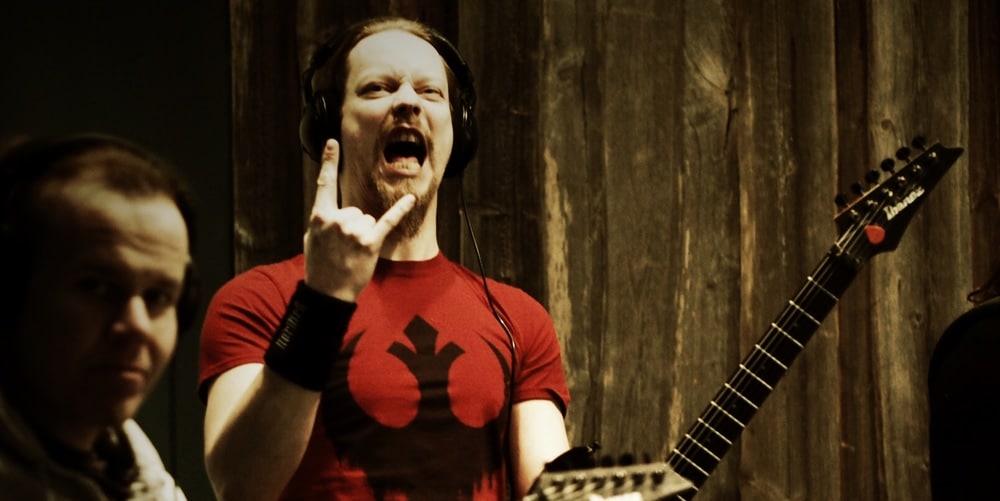 Guitar sounded like it had new strings and the tuning was immediately there.
–Petri Lindroos / Ensiferum

We instructed Finnish platinum-selling metal band from The Official Capital of Metal to try this. During their album session in both Astia-studio and SF Sound Studio they had less tuning problems compared to previous sessions and managed to use the strings at least twice as long. Seems like a definite win-win situation. 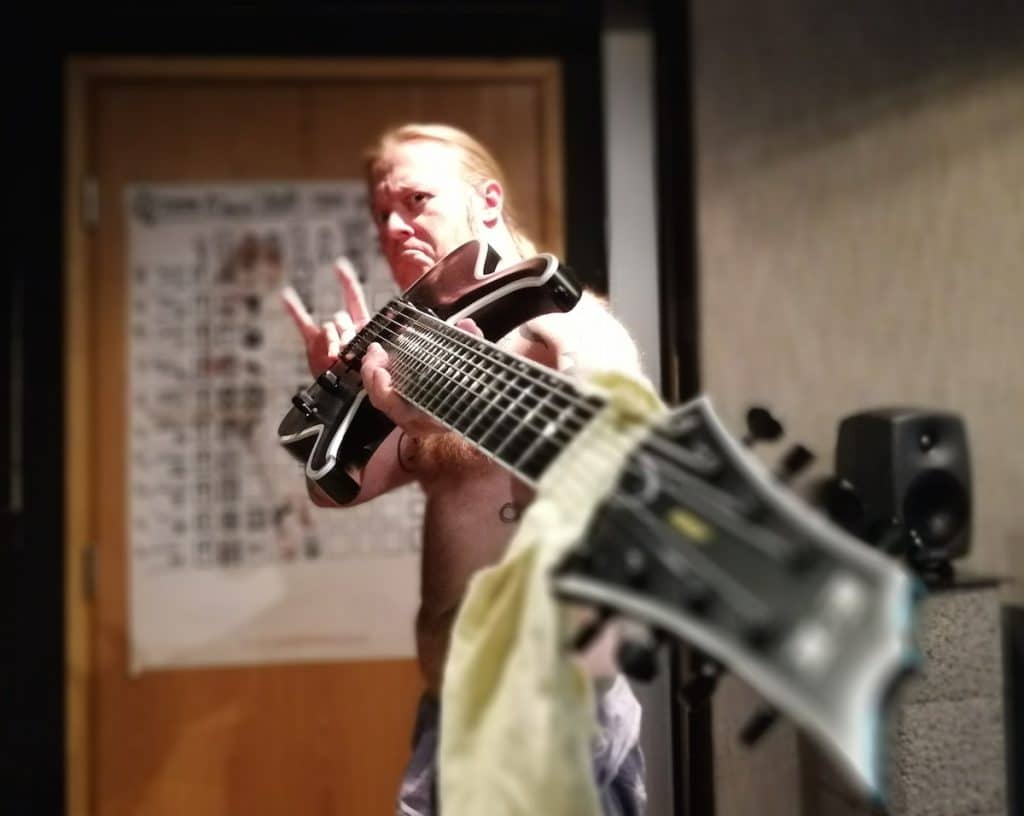 On the studio session of our new album I used this on my guitars and was happy to learn the method truly is onto something.
–Antti Hyyrynen / Stam1na

When to clean the strings?

When rehearsing and playing live, clean the strings before starting to play and after you finish. In studio it depends on how much dead skin falls off your fingers along with the amount of sweat and dirt. We recommend cleaning the strings every 30 minutes to 2 hours. Usually when you’ll notice that the guitar starts to sound detuned or refuses to get in tune. At the moment we haven’t found any negative side effects. 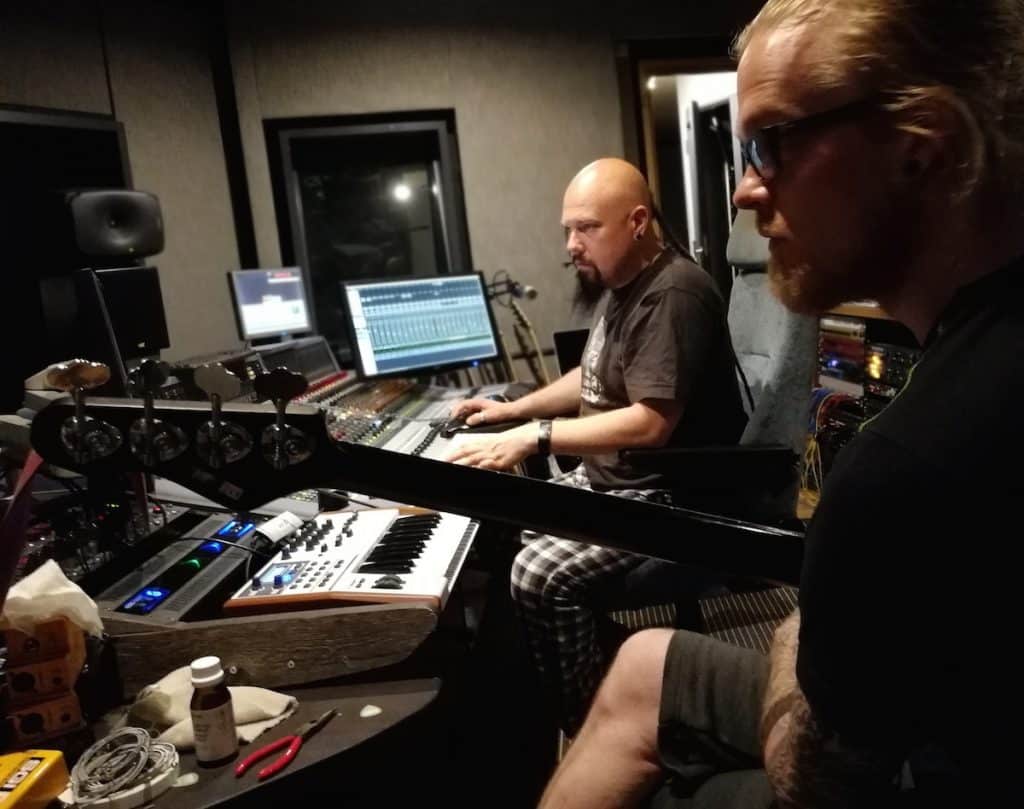 The same applies for bass and acoustic guitar. The first time you do this especially on an acoustic, you might hear a piercing squeal which goes away as the dirt gets off. This will lengthen the age of your strings and save money as you don’t have to change them as often. We like old strings on an acoustic guitar as new sometimes tend to be noisy during chord-changes.

Why tuning is improved

When you play, dead cells, dirt and sweat falls off your fingers and sticks on the strings. Usually on the side of the fretboard where you can’t see it. When you tune with open strings the tuner says all is good. Once you play a chord, the black goo that’s stuck underneath the strings gets closer to frets, sometimes touching them and creating a harmonic that sounds detuned. Pretty simple, huh?

This method brings the brightness back and lengthens the use of strings.
–Petri Lindroos / Ensiferum

There are expensive liquids on the market, yet isopropyl alcohol is pretty cheap. It’s cheap and it is not drinkable. Drink it and you’ll die. Not recommended. We figured this out on an instinct and as the positive feedback started coming in, we had no choice but to share this tip with everyone. In Finland isopropyl alcohol is sold at pharmacy and the lint-free cloth we use is originally for cleaning a computer screen.

Once you start cleaning the strings your tuning will improve. You will save time in studio as your guitar won’t mysteriously refuse to get in tune. You’ll also save money as you don’t have to buy new strings all the time. How cool is that? 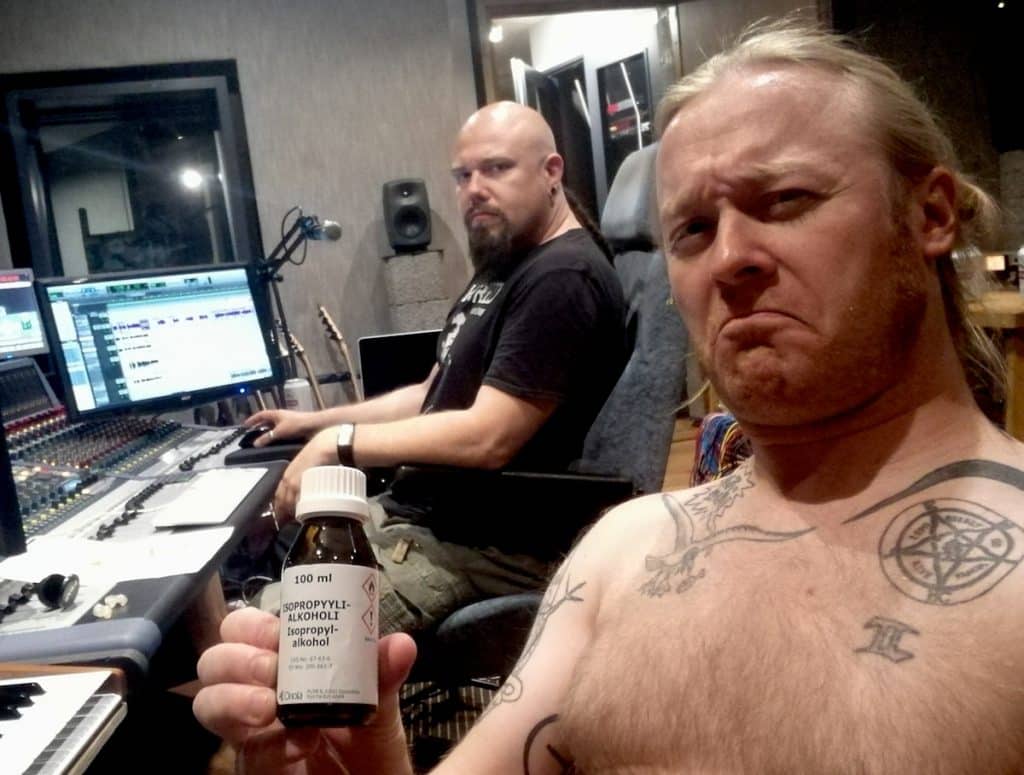 I warmly recommend this to every guitar and bass player.
–Antti Hyyrynen / Stam1na

End of part one of the Coolest Tuning Tip Ever

Thank you for reading the first part of the Coolest Tuning Tip Ever. Please read the 2nd part with full comments from both Ensiferum and Stam1na members along with an instructional video on how to clean the strings. I am happy to share this important information with you.

I cannot wait to reply your questions and comments so please do leave them below. Click here to reserve a full analog tape recording session with me here at Astia-studio. Thank you very much and all the very best!

61 shares
Manage Cookie Consent
We use cookies to give you the best experience; to provide functionality for the website, and for statistical and marketing purposes. You as a person won't be identified.
Manage options Manage services Manage vendors Read more about these purposes
Settings
{title} {title} {title}