You made an album back in the glorious days of analog tape machines, but were never satisfied with the mix? Still have the original multitrack tape(s) in the storage and yearn to hear the songs with improved sound and balance? Astia-studio offers a service to remix tape session. Here is a story of how Skepticism’s album Stormcrowfleet full analog remix was done.

The goal was to remix the album with the original vision and improved technical excellence.
–Eero Pöyry / Skepticism

One such album we recently had the honour to remix is Skepticism band debut album Stormcrowfleet. It is considered one of the classics when it comes to funeral doom metal. Session time was five days including mixing and mastering both the CD and vinyl versions. Back in 1995 the band was young and had their say during mixing.

Even though the result is nothing short of a unique masterpiece, they were never satisfied with the mix as it is literally impossible to hear the parts and how they were played. The band contacted us to do the remix respecting the original mix and mood while making the songs translate the instruments better.

They had stored the four 1/2″ multitrack tapes correctly. Brief testing showed the tapes would roll and the recorded sound was in fact pretty good. The album was recorded using two Fostex E16 1/2″ 16 track tape machines synchronised together, so we naturally used the same brand and model. For synchronisation we had Adam Smith Zeta Three synchroniser that worked like a charm.

Rick Austin is a wizard when it comes to Zeta Three and has an awesome website full of info. Each tape had one track for SMPTE time code making the total track count on the album to maximum of 30.

The band arrived to studio and in few hours the basic sound done. The guitar player was happy to hear his parts for the first time ever. To fully understand this, you need to check the original version of the album. 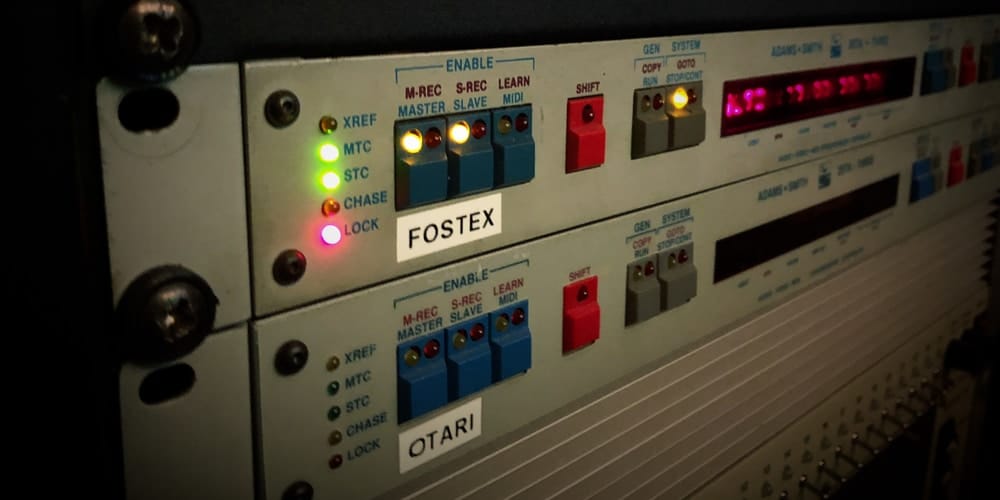 Astia-studio’s analog equipment; massive plate reverbs and drum effects along with feeding the drums to the live room thru a PA system were perfect for the project. All this was very good for the overall sound.
–Jani Kekarainen / Skepticism

After two days we had the songs from the first tapes completed. With the next set of tapes, we bumped into what is called a sticky tape syndrome. First two tapes were both Basf and despite the fact that they were in storage for over 20 years, both worked great without any problems. The two Ampex tapes that suffered from the sticky tape syndrome took more than one very long studio day to make them run problem free. Both Ampex tapes were shedding sticky stuff and it turned out to be impossible to fast forward or rewind them. When we played the tapes, after every 10 – 20 seconds the tape machine heads would get so sticky that they would stop the tape and the cleaning continued.

We spent hundreds of cotton swabs dipped in isopropyl alcohol to constantly clean the tape heads. There were moments when we were about to give up. No matter how many times we’d run the tapes thru, there seemed to be no end to the sticky stuff. Finally both tapes were playable from beginning to end without any drop-outs and so the mixing continued. Eventually we managed to complete everything on schedule. 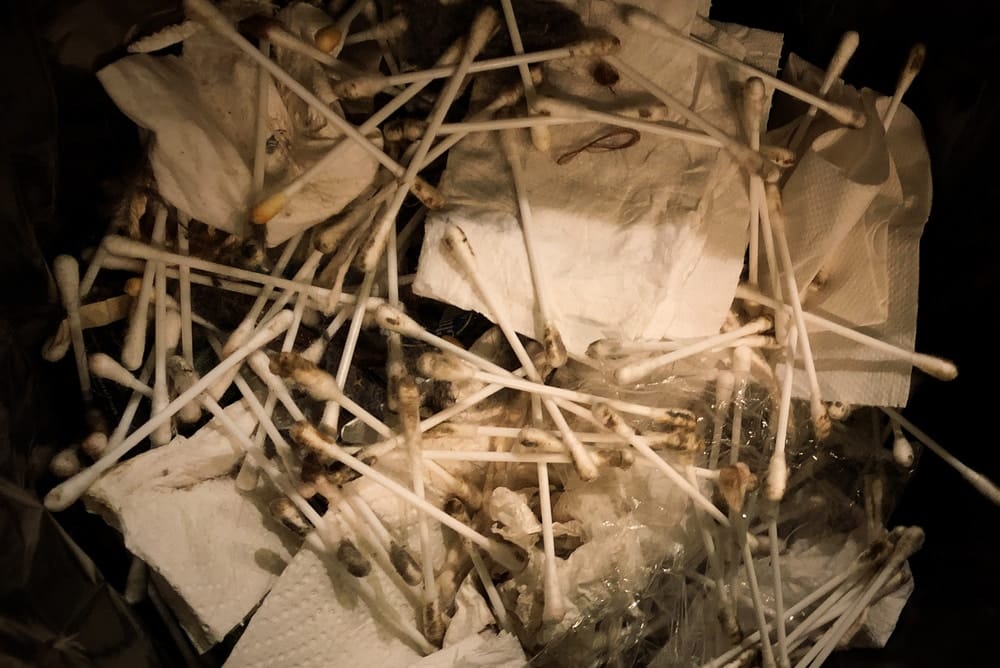 When the tapes refused to roll we were about to give up. Anssi’s calm and solution-focused attitude kept us going and in the end the hard work paid off.
–Jani Kekarainen / Skepticism

Astia-studio has 16 tape machines. We currently offer remix service for 2″ 24 track, 1/2″ 16 track and 1/4″ 8 track recordings. Our multitrack tape machines are Otari MTR-90mkII 2″ 24 track, two Fostex E16 1/2″ 16 track and a Fostex R8 1/4″ 8 track as those were the most common in Finland. If you would like to remix other tape formats, please still contact us and we will do our best to find the right machine for the session.

When making a vinyl release from files the final product, even though it sounds better compared to Spotify and CD version, is still a bit empty and distant. This is why we strongly recommend cutting the vinyl directly from tape.

A few years ago vinyl cutters that accepted tape were not common at all. Now there are many full analog cutters available and there’s one in Finland too! Stormcrowfleet vinyl version is full analog and made not from files but from tape. We are looking forward listening the vinyl version as it will sound exactly the same as it did during remixing. 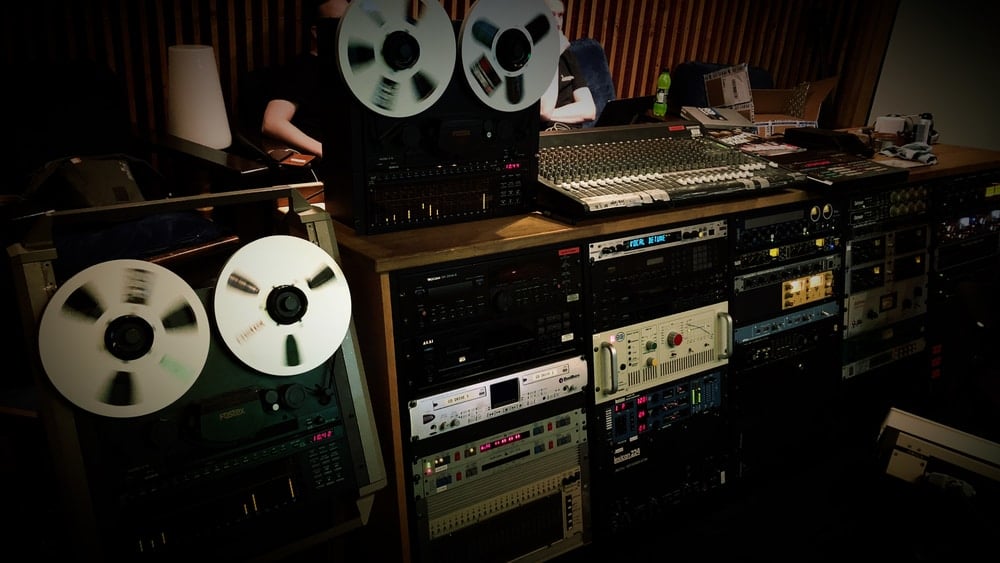 The project peaked to vinyl cutting in August 2018. Even though we didn’t plan the process to be full analog all the way to the final product, it became a nice bonus. I cannot wait to get to compare the remixed vinyl and CD side by side.
–Eero Pöyry / Skepticism

What you need to remix your tape session?

We hope that you have stored the tape(s) in dry space away from sunlight and magnets. Always store the tapes as tails out i.e. played to end leaving the end of tape to outer ring of the reel to avoid bleed-thru from one tape layer to another. If you were in high school when the linguistic exams were played from tape machine, during every pause you could here a pre-echo of what was coming. This pre-echo is something you don’t want to have on your music, hence tails-out.

Documentation helps and makes things easier. Figuring by listening which instrument is on which track is very time consuming. Every professional tape recording studio used a track sheet to document what was on the tracks. Important info includes tape speed, reference level, equalisation, possible noise reduction and synchronisation format. Please make sure to include all documentation from the original session.

The remix is much more clear without losing the original heaviness.
–Jani Kekarainen / Skepticism

Thank you for reading about our tape session remix service. If this post was helpful, please share it on social media. This way you will help your friends to benefit from the information.

Do you have a multitrack tape that has songs you wish would sound better? Contact me privately by clicking here and let’s continue the discussion. Thank you very much and all the very best!

19 shares
Manage Cookie Consent
We use cookies to give you the best experience; to provide functionality for the website, and for statistical and marketing purposes. You as a person won't be identified.
Manage options Manage services Manage vendors Read more about these purposes
Settings
{title} {title} {title}